A delegation from the Irish College of Paramedics met with the Paramedic Association of Canada (PAC) at the 2016 Irish EMS Gathering in Killarney.  This was the first time in our history to meet with another paramedic professional body and the event was kindly organised by our ICoP member, colleague and editor of the Irish Journal of Paramedicine Alan Batt.  The Canadian delegation included Chief Administrative Officer Dwayne Forsman and Executive Director Pierre Poirier along with representatives from several of PAC's regional chapters, including Mary Osinga, Jodi Possia, Ryan O'Meara, Tim Stairs and Dave Deines. The ICoP was represented by Ray Lacey, Eoghan Connolly, Alan Batt and Shane Knox.

The Canadian contingent at the EMS Gathering. Photo kindly supplied by Kieran Minihane.

In addition two members of the Pre-Hospital Emergency Care Council’s executive also attended at the request of PAC and ICoP.

The evening started with overview of the role of ICoP and included how we were established, the formation of the group and where we see ourselves as a representative body for the profession of paramedicine in Ireland.  We gave a brief outline of our achievements to date and of the many challenges we have encountered over the few years of our existence. Feedback and suggestions from the PAC members was instant and many great ideas, based on their own experiences, were proposed as ways of countering many perceived difficulties.  One such idea was that we should organise into ‘Chapters’ or areas were activities and co-ordination of membership could develop with each Chapter linking back to the main professional body.  PAC explained how they were initially established, the difficulties they encountered and how they developed strategies to allow them to progress to the largest paramedic association in Canada with over 20,000 members.  As each member of the Canadian group joined in and contributed to the discussions we could only take confidence and were reassured that we are going in the right direction.  The PAC members were truly inspirational and they really encouraged and motivated the ICoP members.

It was amazing the way such a very large professional body had encountered so many of the same and real issues ICoP has encountered.  These included building the membership base, organising activities, funding, insurance for members, maintaining membership and representing the paramedic profession at (Regulator) Governmental level, to name but a few.  However the largest issue of all was how they managed to overcome the initial difficulties of effective communications with their membership and balanced appropriate interaction with required information dissemination whilst not becoming overbearing.

Mr. Brian Power and Ms. Kathleen Walsh gave an overview of the function and structure of our Regulatory Body, the Pre-Hospital Emergency Care Council (PHECC).  Brian outlined the various levels of pre-hospital care responder and practitioner and discussed the role of PHECC in Ireland.  Kathleen engaged the group with an overview on our standards of education, clinical guidelines, and the role of PHECC in light of the new legislation (SI 449) which allows non-medical personnel to administer certain medications. 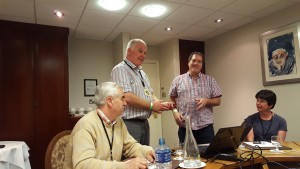 The entire room was awash with ideas and suggestions on how to move forward.  Relationships were easily and instantly established through the common ground of paramedicine.  The visitation ended with a presentation from the members of PAC to the ICoP President, Shane Knox, of a specially minted $15 fine silver coin, authorised by the Government of Canada and struck by the Royal Canadian Mint. The coin depicts two paramedics in the course of their duties and is a limited piece in honour of Canadian paramedics entitled ‘2016 $15 Fine Silver Coin, National Heroes Paramedics’. Shane was surprised and honoured to receive such a gift. 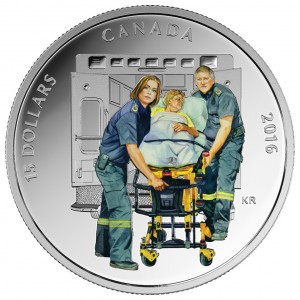 The evening ended with a joint commitment to continue working together and to develop and sign an agreement of formal association between the PAC and ICoP.

Thank you to all who attended and participated in this inaugural and inspirational event, particularly all members of the delegation from the Paramedic Association of Canada.

Previous post 1,000 new paramedics to be trained in Scotland in next 5 years