Tragic death of patient in NAS ambulance fire in Naas 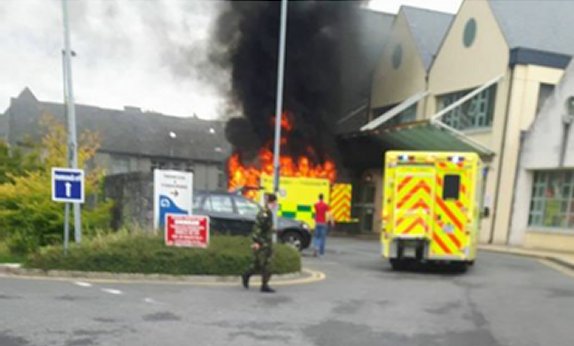 The Irish College of Paramedics wish to extend their deepest condolences to the family and friends of the patient who died in a tragic incident involving a NAS ambulance in Naas this afternoon.

Our thoughts are also with the two paramedics who were injured in this terrible tragedy. We wish them a speedy recovery.

THE HSE HAS confirmed that the death of a patient in an ambulance which caught fire at Naas General Hospital was a direct consequence of the fire.

Two National Ambulance Service paramedics were also injured in the incident, with one understood to have sustained burn injuries.

He described the incident as an “unbelievable tragedy” and said that he has spoken to the family of the patient.

The patient, a man in his 70s, died shortly afterwards and O’Brien said his death was a direct consequence of the fire.

Two paramedics who had brought the elderly man to hospital were injured in the fire. One has now been released and the second was taken to St James’ Hospital in Dublin but is said to be doing well.