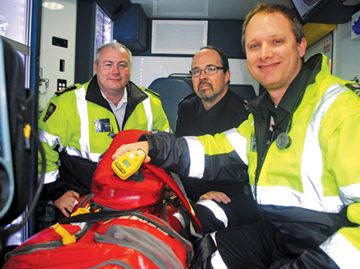 Rick Ferron, left, Niagara Emergency Medical Services’ deputy chief of operations, and paramedics Derek Scott and Tim Harold, are seen in an ambulance outside of the EMS dispatch centre in Niagara-on-the-Lake on Wednesday with one of the portable carbon monoxide detectors that may have saved nine people including two paramedics from carbon monoxide poisoning last Thursday.

Rick Ferron, deputy chief of operations for the ambulance service, said high levels of carbon monoxide were quickly detected by the portable alarm within 40 seconds.

“They’d just put their bags down and were introducing themselves to the lady when the alarm went off,” he said.

The paramedics immediately evacuated the home, where six adults and a child were, and called the Niagara Falls fire department.

“They did the right thing: they got everybody out and they called us,” he said.

Smith said firefighters shut off gas supplies such as furnaces and gas fireplaces when responding to carbon monoxide calls, ventilate the home and call the gas company to come in to investigate.

The insidious nature of carbon monoxide, which is produced through combustion from sources such as furnaces, gas or kerosene heaters, gas dryers or ovens, gas or wood-burning fireplaces, barbecues and vehicles, is that it’s odorless and colourless.

Emergency officials say the initial symptoms often appear similar to flu-like symptoms such as fatigue or headache, creating the potentially life-threatening scenario in which people feeling sick decide to lay down, thinking they’ll feel better in the morning.

“I’d hate to think what would have happened if it has been like that overnight” at the Niagara Falls home, said Ferron.

Smith said the people in the home had no idea they were breathing in poison that was displacing oxygen in their bloodstream.

“The people in the house weren’t aware of what was happening,” he said. “That’s why carbon monoxide alarms are so important.”

Ferron said the alarm might well have saved the lives of the paramedics, too, meaning nine lives may have been saved in total. Even after the brief period they were in the home, the paramedics ended up with minor headaches, he said.

“It’s not out of the realm of possibilities that, given the level of carbon monoxide, that they themselves could have been injured or worse,” Ferron said. “It was a danger to them at this point.”

Five of the six people on the home ended up being taken to hospital for treatment, but Ferron said the paramedics didn’t need medical attention.

Smith said the EMS was smart to have the foresight to have portable carbon monoxide detectors, which aren’t mandatory for ambulance crews. But new legislation passed in Ontario makes it now mandatory to have working carbon monoxide alarms outside of all sleeping areas if your home has a fireplace, any fuel-burning appliance or an attached garage.

Ferron said the ambulance service has had the portable alarms for about four or five years. The idea came after a tragedy in British Columbia in which two paramedics responding to a call at a building on mining property died from carbon monoxide poisoning, he said.

“Within a minute both were unconscious,” said Ferron.

Smith said without the portable alarm on the paramedic bag, last Thursday’s situation could also have ended tragically.

“Who knows what the outcome would have been?” he said. “It could be that one little detector made the difference.

“This is one of the fine examples of the need for detection.”

Kevin Smith, chief of Niagara EMS, said the case is a sobering reminder of the dangers of carbon monoxide.

“Carbon monoxide exposure is an extremely dangerous situation and alarms do work by alerting residents to the dangers of this silent killer,” he said.

Next post Cyclist injured while in ambulance is awarded €27,000